The background, in case you’re relatively new here: When my son was 8 months old, I designed a growth chart that would grow with him. With spaces to fill in all his firsts, quirks and achievements, it quickly became my favourite handmade piece. I loved the fact that we could take it with us if we moved, it was personalised just for him and in the later years, he could help fill it in and add his own personal touch to it! It’s also a neat place to keep track of the little things I might otherwise forget like his favourite toy when he was 3, his Halloween costume when he was 5 or his first piece of artwork when he was 1.

I thought it was a pretty darn good idea for us but a man came to fix our dishwasher while I was in the thick of burning it on my dining table, and he went on and on about how I should sell these. That there would definitely be a demand for something like this. Taken aback by how enthusiastic and supportive this complete stranger was, I put the word out amongst friends to see if there was any interest. Right away I started getting orders.

It was rewarding to personalise each one I made. “My daughter never really crawled so can we say ‘bum scoot’ instead?!” “My child is a bit older so can we swap in ‘first sleepover’ and ‘first loose tooth’?” “My friend’s nursery is all white so can we whitewash it?” “My daughter’s theme is hot air balloons, can we incorporate them somehow?”

When a friend of mine wanted a chart for her son, I got a little giddy. Why you ask? Because “With a name like Wyatt Murdock, it HAS to be cowboy themed”, she said. Agreed! Little did I know, Wyatt’s chart would quickly become my favourite. And with her permission, I get to share it with you!

I started researching old WANTED posters for stylised fonts and little details I could borrow. But because her adorable little man wasn’t, in fact, an outlaw, we agreed that something a little softer would be ideal. Once she agreed to display his name in rope it opened up the rest of the board to the blocky western styled fonts that are the trademark of all WANTED posters. I LOVE the rope and I’m so glad we went that route! It adds enough contrast and relief so that the board isn’t exhausted by heavy, blocky fonts. It’s my favourite detail.

The body of the chart stayed relatively the same as the others. The only altered detail was swapping out the daintier handwritten titles for the more solid western style fonts, thus carrying the theme all the way through to the bottom.

I always like to reserve the bottom area for a motif that says “growth” or “up”. I’ve used rockets and hot air balloons typically but these have no place on a cowboy chart so after a little back and forth, we went with cacti! Again, a little less expected, a little more unique. The final touch, of course, being the sheriff’s badge. 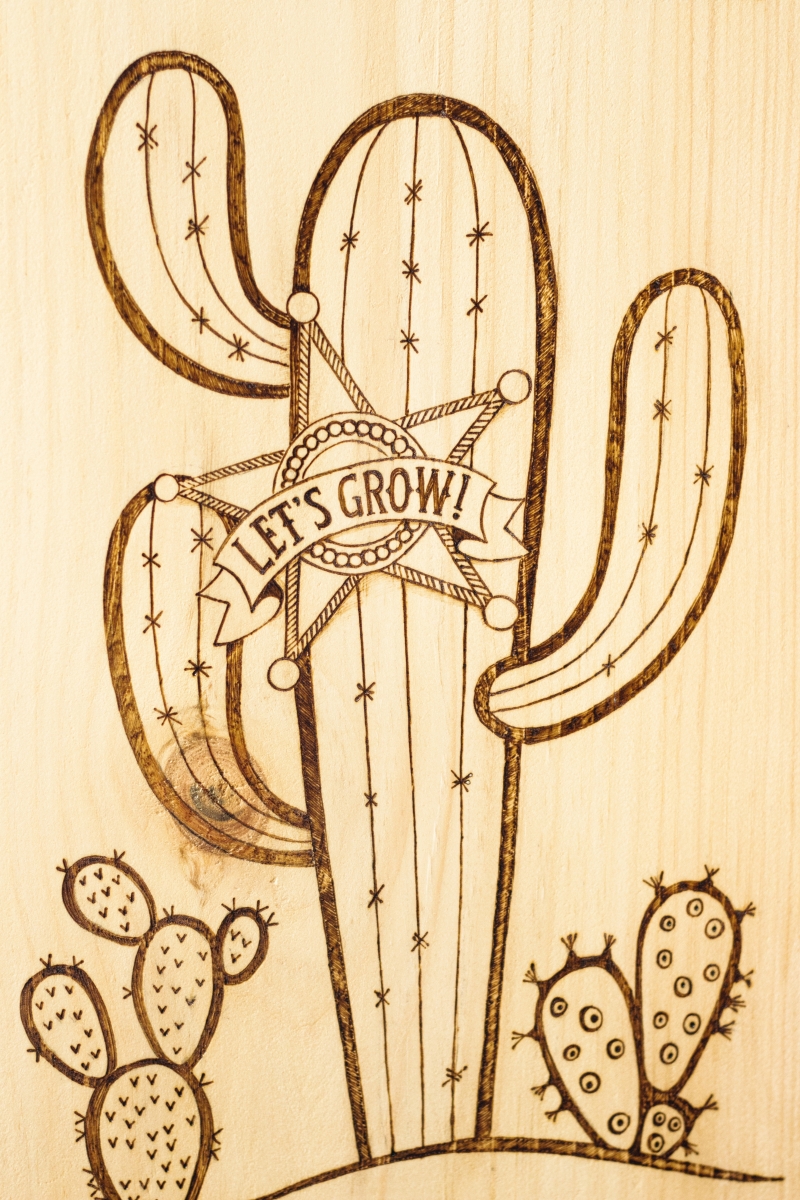 The imperfect texture that wood and tool make together really added to the style and feel of the whole thing. It really gave Wyatt’s chart an authentic western look. Did I mention this is my favourite growth chart? 😉

I’ll admit, I had a rough time handing this chart over to its rightful owner. It’s by far my favourite to date (even over my own son’s 😬 ). But seeing how happy it made her and hopefully her one-year-old, lessened the sting…a bit lol. Looks like the bar has been raised! Now if only I could nail down a theme for my daughter’s. In the meantime, enjoy and happy birthday Wyatt!